Do you need to grow but don't know how and to whom to entrust your campaigns? GrowthYouNeed can help you with your strategy from A to Z.

NFT: the future of blockchain or just a bubble?

To learn more about the world of NFTs, their links with blockchain, and their possible uses, read the article by our nft marketing agency. 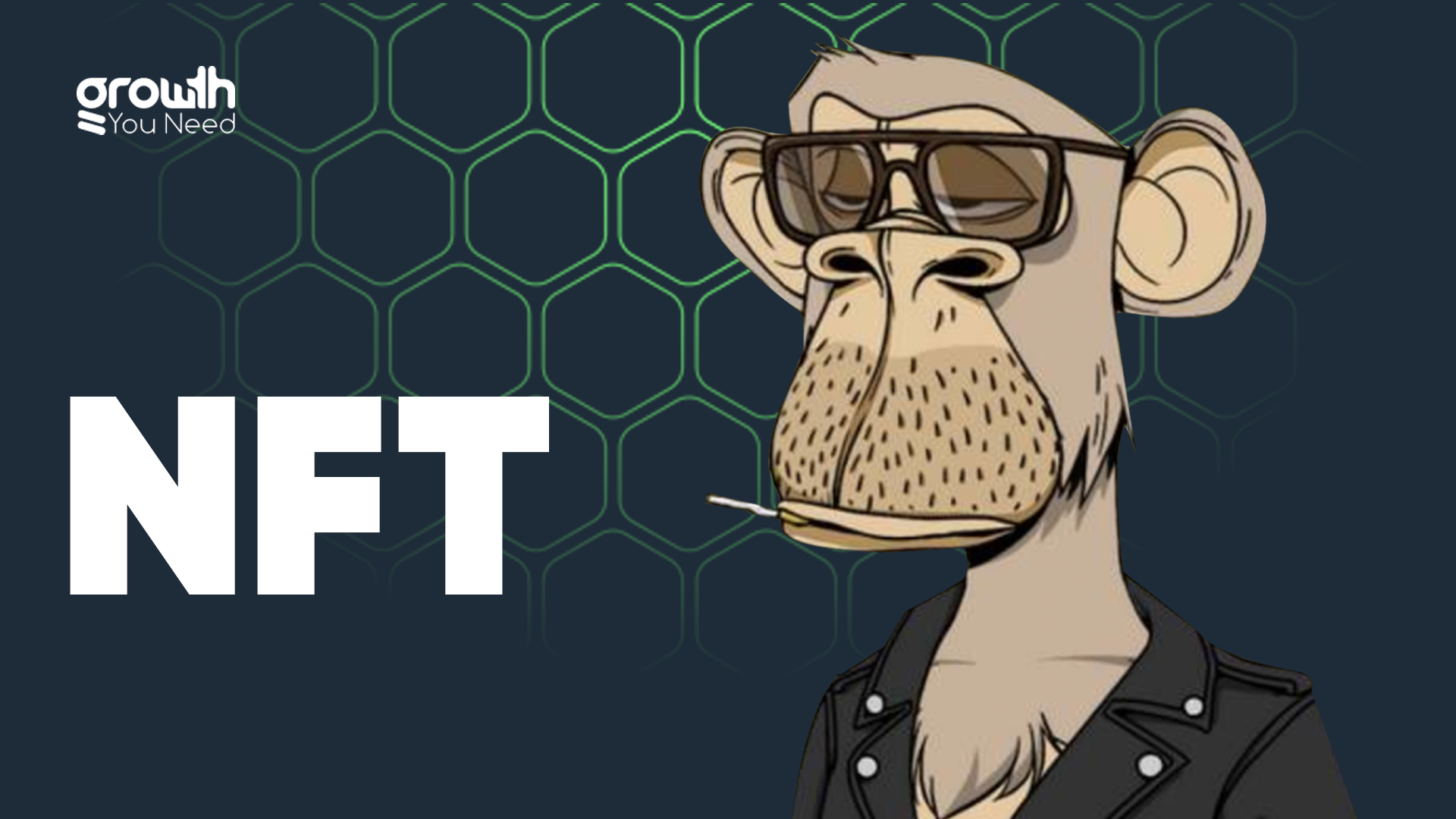 We begin a series of articles on NFT technology - 1/3

It's the big trend of the moment: many celebrities are talking about the famous NFTs, including very famous stars like Paris Hilton, Justin Bieber, Snoop Dogg and even top athletes like Stephen Curry.

Bored Ape Yacht Club, Cryptopunks, or The Doodles, these names probably don't mean anything to you, but they are the 3 biggest NFT collections today!

The uninitiated public calls NFTs a "speculative bubble" or "just digital art" while the enthusiasts are convinced that NFTs are a technological revolution and the future of blockchain. The question here is not whether NFTs are a scam or not, but to find out why they are trending and what is the possible future for this technology.

What is an NFT?

NFT is an acronym for "Non-Fungible-Token", which refers to a file stored on the blockchain that is owned by the user who bought, traded or obtained it via a drop (it is very common for NFT collections to do drops to get their name out there or to regain goodwill with NFT enthusiasts). The file in question can be an image, video or audio file.

To simplify: "fungible" also means "replaceable", so when we talk about a non-fungible token, it means that it is not replaceable, but above all, UNIQUE! Whereas a fungible token is replaceable and not unique, often available in very large quantities: currencies and crypto-currencies are a perfect example of a fungible token, as a euro, a dollar or a bitcoin are not unique. Let's say you buy a coffee machine with a €100 note, although the money has been spent, it will come back into your account when you receive your salary, whereas an NFT, as soon as it is sold, no longer belongs to you.

Intervention of the blockchain

You might ask yourself "then why not just sell the file on a specific site and receive the money via PayPal for example?"because the risk of fraud or scamming is far too high: many users can claim to be the original creator of the file and blackmail the seller by threatening legal action for example. Then, the seller may also be the originator of the scam, sending a different file than the one promised, or not sending it at all.

In short, as you have surely understood, the possibilities of fraud or scams are diverse, so how can we authenticate the original creator of the file, authenticate the file itself, sell it and receive payment in complete serenity? By using blockchain technology, which allows all of the above actions to be carried out.

It is important to know that when you create an NFT, you have to authenticate it on a blockchain by uploading it (currently, most NFT transactions are done either on the Ethereum blockchain or on the Solana blockchain), and then make it available on a marketplace dedicated to NFTs such as OpenSea, which is the best known, although there are many others, such as Rarible or Mintable. Of course, don't forget to enter your Metamask wallet on which your NFT will also appear.

Once the NFT has been made available on the marketplace that the creator has chosen, users will be able to buy it at the price indicated by the creator (e.g. 10 ETH), the user then pays the 10 ETH that the creator receives on his Metamask wallet. At this point, the transaction will appear on the blockchain and the creator will no longer be noted as the owner of the file, but the buyer will appear as the new owner.

In this situation, the chosen blockchain network will no longer recognise the creator as the owner of the file, even if he is the creator, so the "possession" of the file in question can no longer be falsified, it can no longer be duplicated, because the network only recognises one version of the file, a buyer cannot buy the NFT if he does not have the necessary amount in his wallet (no "cheque" in wood or fake transaction) In short, a transaction where neither party can cheat the other.

What does the law say about NFTs?

At the moment, the legal framework for NFTs is very unclear: there is no real regulation yet. Some people refer to an NFT as a "digital work", except that it is not legally recognised as such, which means that the NFT cannot benefit from the tax advantages that come with a "work". It is very important to understand that one is not buying the work in its entirety, but rather a token that gives access to the file recorded on the blockchain, hence the name of token, EXCEPT, if the total transfer of copyright is provided for in the smart-contract linked to the NFT.

The current value of NFTs and possible uses

If the detractors of NFTs call them a rip-off, it's because their only current value is speculative: it's the hype and buzz around the work that drives the price up or down. The hype around the Bored Ape Yacht Club only originated with the stars who were interested in the project, and then the fans of those same stars followed their idols on the subject, which consequently quickly drove up the price of a Bored APE. Of course, it is not the only NFT project that has been so successful, but this allows us to quickly draw a parallel between why an NFT is worth a lot of money or not: it is the speculative aspect, and it is this argument that the anti-NFTs use to discredit the various existing projects.

This speculative aspect has of course inspired scammers: just pay a small designer on Fiverr to create a design, communicate around it in a way that tries to create a hype to drive the price up, and then once the price has gone high enough, disappear with the collected cryptos without fulfilling the benefits promised at the base. Of course, there are serious projects out there, so don't dwell on the small percentage of projects that were scams.

At the moment, NFTs are mainly used in the authentication of digital works, but this blockchain-based authentication technique can be extended to many areas:

NFTs have very limited uses at the moment and are a niche phenomenon, but who knows, maybe in a decade or so NFTs will be present in all fields, all industries and everyone will use them via various applications to make their daily lives easier.

The next article will look at the various methods of promoting NFTs.

If you are looking for an NFT marketing agency that can help you promote your NFT project on social networks, then GrowthYouNeed is for you!

We are aware of the major challenges presented by the web3, hence our desire to help emerging web3-related projects.

Do you have any questions? Do not hesitate to contact us via the contact section of our website, we will answer you as soon as possible.

Which marketing channel should you start with if you are a new company?
June 2, 2022

3 signs that your growth marketing agency is not doing a good job
April 7, 2022

Why audit your advertising accounts?
March 29, 2022

LinkedIn Insight Tag: why and how to use the LinkedIn tag?
January 13, 2022

How to make a Growth Hacking Linkedin strategy?
December 23, 2021

What is scraping, and why use it in a Growth Hacking strategy?
December 23, 2021

What impact will IOS14 have on your Growth Marketing strategy?
December 23, 2021

Growth Hacking outsourcing: how to choose your partner
December 23, 2021

How to organize a paid event on Facebook
December 23, 2021

How to choose your Growth Hacking agency?
December 23, 2021

Growth Marketing Agency: how to choose your agency?
December 23, 2021

We have a scientific approach to
Digital Marketing

Contact us to see how we can help you get more results for less money.

Thank you for your message.
Don't waste time, book a meeting directly with our strategy and sales team:
MAKE AN APPOINTMENT
Oops, there was an error sending the form.